Find this article at:
go.ncsu.edu/readext?857067
— Written By Kimberly Armstrong

As the saying goes, “He was a bold man that first ate an oyster.” And some might add that bold man must have been awfully hungry too! They might not be pretty, but these humble bivalves have been elevated to gourmet status and are consumed with gusto, paired with an ice-cold beer or a flute of champagne. Whether slurped raw in their own salty elixir, steamed, roasted, fried, or in a stew, they’re a culinary delight for the discerning (and adventurous) palate.

Katherine McGlade loves oysters. In fact, she likes them so much that she left her successful environmental consulting business to pursue oyster farming. Her company is Slash Creek Oysters, which she operates along with her husband, Spurgeon Stowe. “I had studied oysters, so I knew a bit about them,” she says. “And I thought there was a market for them that wasn’t being satisfied.” Add to that the fact that she had grown weary of having a desk job and was looking for a way to work outside.

That is how Katherine finds herself not heading to an office each morning but shoving off from the dock, steering her skiff through the shimmering waters of the Pamlico Sound, dazzled by sparkling sunbeams, in awe of an impossibly blue sky, and filling her lungs with tangy salt air. Sh 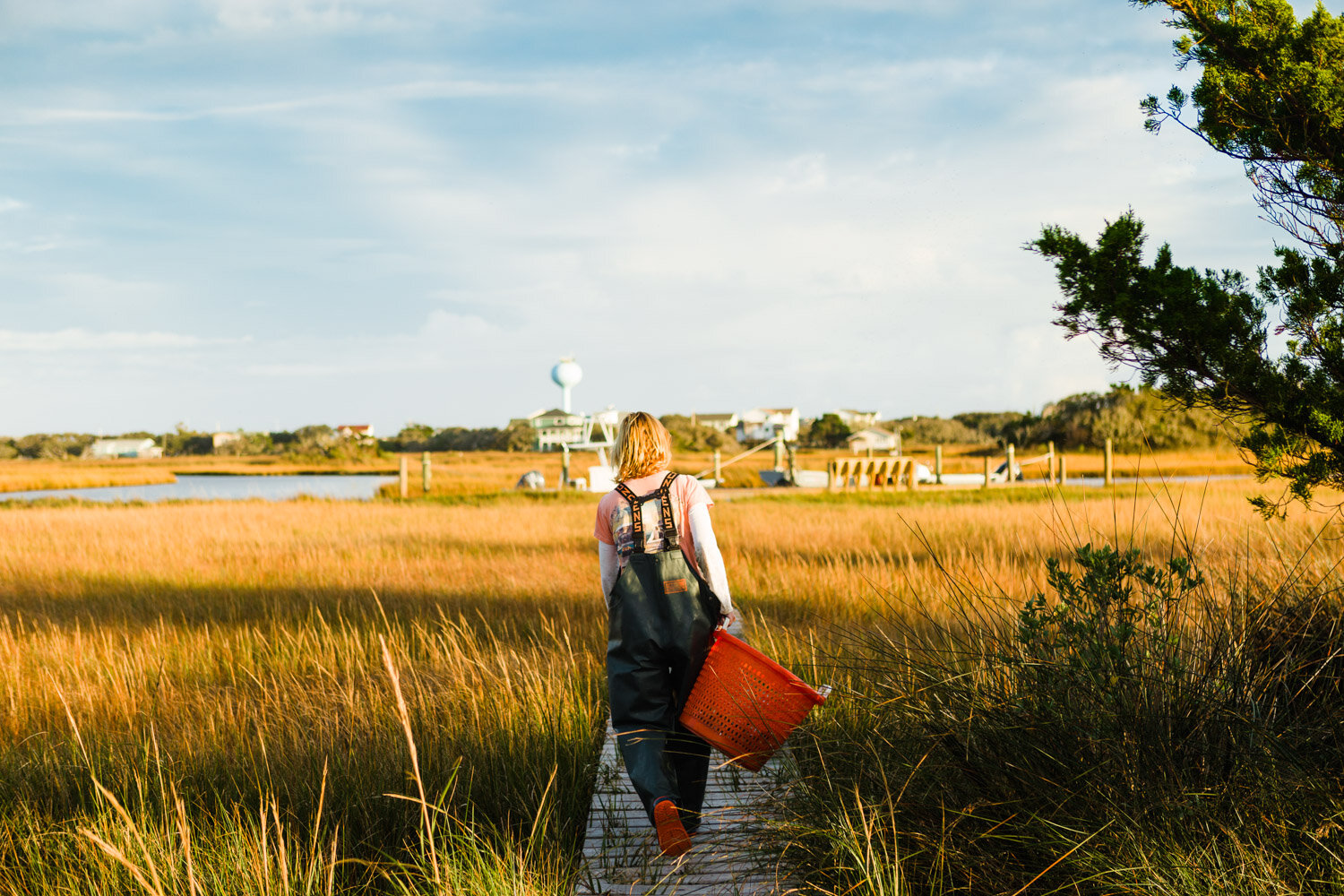 e reaches her five acre-oyster farm, blissfully aware that her days behind a desk are over, and her workday begins.

Oyster farming is mariculture – cultivating marine organisms in open water for food. And just like land-based farming, there’s a great deal of hard work and financial investment involved. Increased demand for oysters and depletion of wild oyster harvests have led to the popularity of oyster farming in North Carolina.

In the beginning, as Katherine explored the prospect of oyster mariculture, she reached out to established farmers. “They were all very generous with their time and with sharing their knowledge. It’s such a welcoming community!” She read an abundance of publications, reviewed academic research, examined step-by-step procedures, and utilized resources offered by North Carolina Sea Grant and UNC Wilmington. The Small Business and Technology Development Center helped with her business plan and assisted her in creating spreadsheets detailing cost, timelines, and projections. There was much to learn. “However,” she says, “at some point you just have to jump in and do it.” 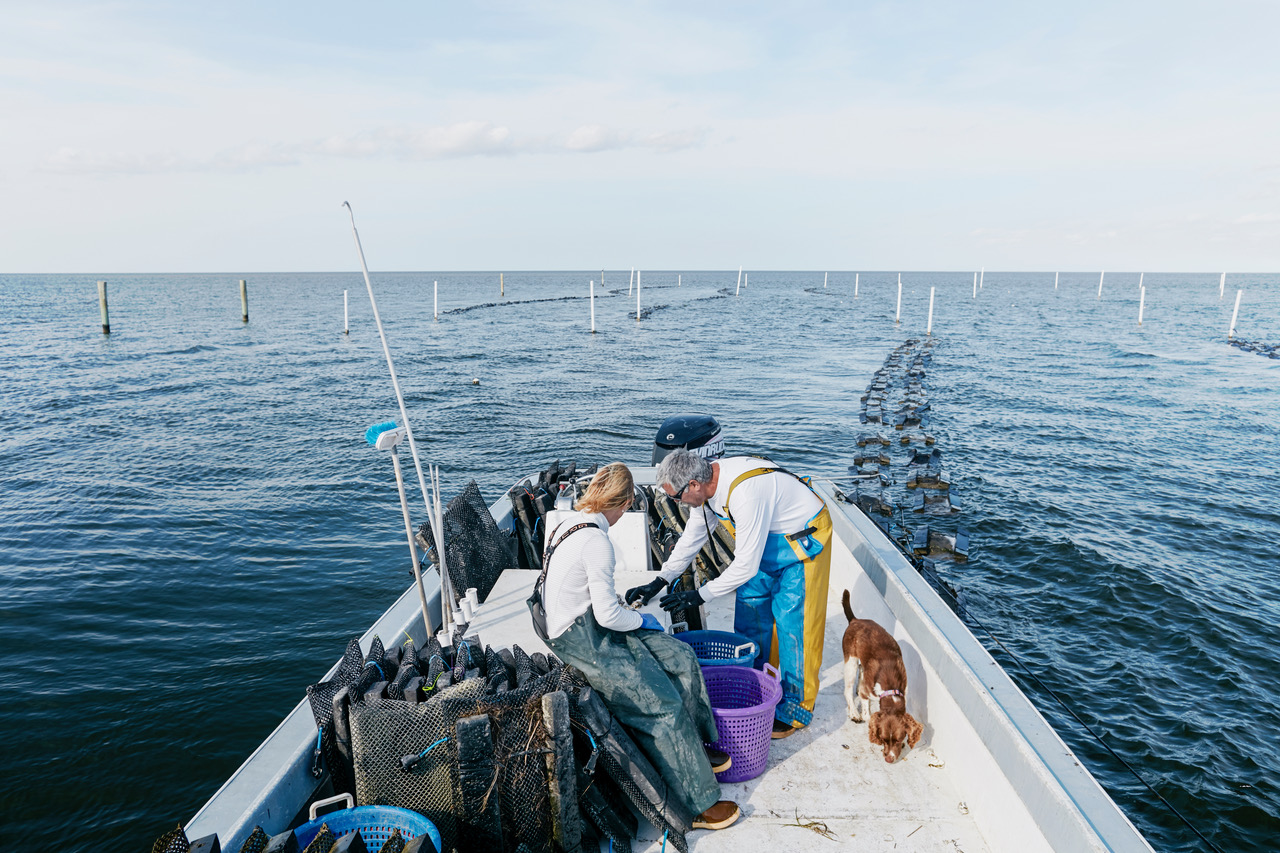 She had a general idea of the area where she hoped to secure a lease permit (a lengthy process). She was aware of the pristine water quality and salinity of the Pamlico Sound, the distance from the mainland, and the lack of agricultural and storm runoff – all contributing to a superb location for oyster cultivation. So, when she happened upon an area tucked into a corner of Sandy Bay, off Hatteras Island, she knew that she had found that “sweet spot” and was eager to set up shop.

Meet FLUPSY. The FLoating UPweller SYstem is an essential piece of oyster farming equipment. It provides a protected environment for the oyster seed babies. Here the seeds are placed in silos with fine mesh screens as a pump constantly pulls seawater through the screens, delivering an all-you-can-eat buffet of tasty phytoplankton. They’ll remain here, receiving lots of care and attention, growing all the while, until their nursery days are over, and they graduate to the open-water of the farm.

Katherine uses mesh floating “grow-out” bags on her lease. The bags float on the surface allowing for adequate water flow and plentiful plankton, supplying the necessary nutrients for continued growth. Seaweed, algae, and barnacles attach to the bags potentially blocking water flow, so bags are regularly flipped to expose these organisms to air and light, reducing buildup. The bags are periodically emptied and pressure-washed as well. 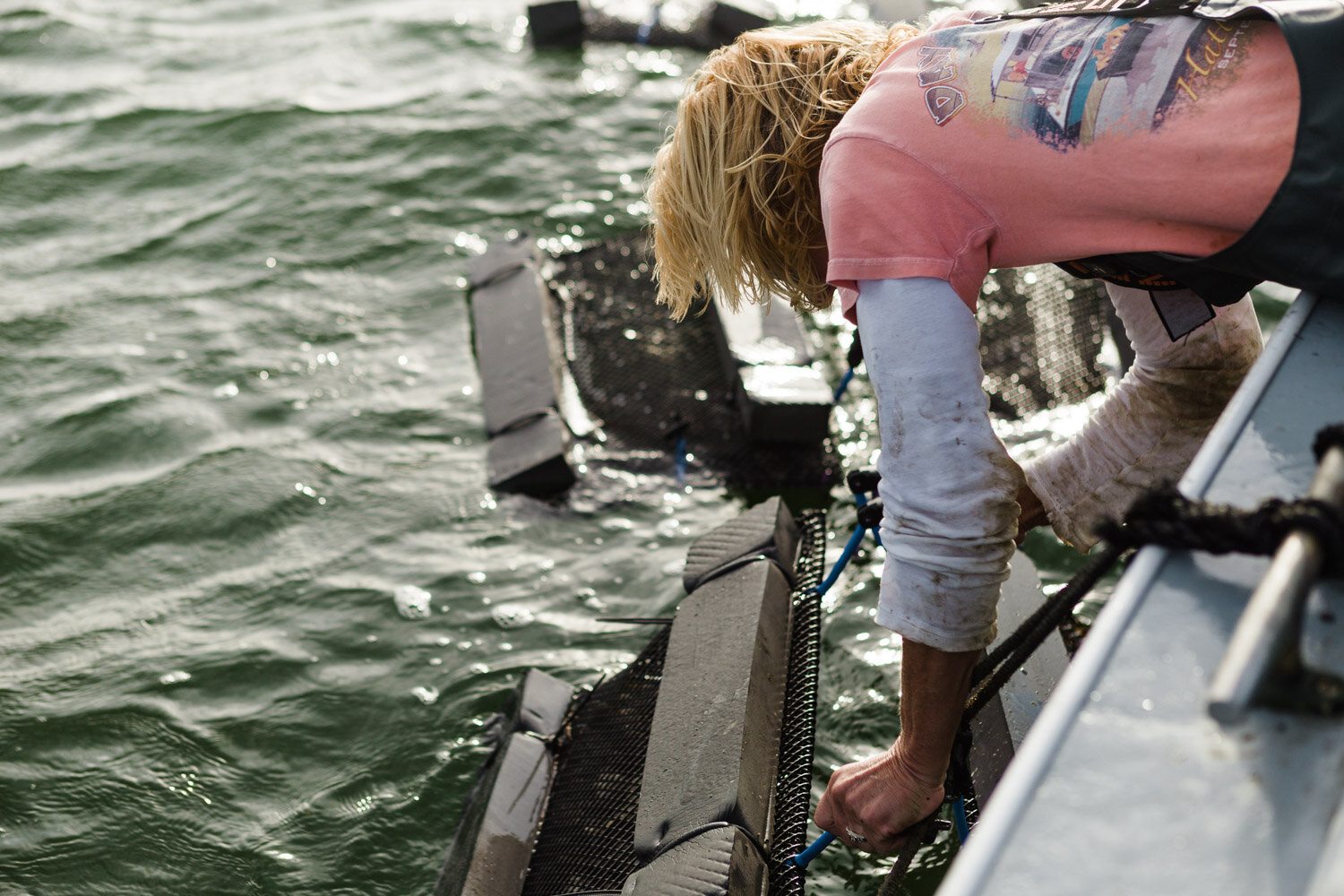 As the oysters grow, they are sorted for size and taken for a spin in the tumbler which breaks off the edge of the lip of the shell. This action promotes stronger, more uniformly shaped oysters and helps develop a deeper cup, promoting meatiness, and making them easier to shuck.

There are slow growers and fast growers, but it generally takes a year for the oysters to become adults. Katherine grows triploid oysters and because they’re sterile they don’t expend energy reproducing during the summer months (this is what causes fertile oysters to be thin and watery). As a result, they grow to market size faster and don’t lose body weight, remaining firm and plump. No more worrying about that pesky “R” month rule! These bivalves can be appreciated year-round.

Once harvested, the oysters are cleaned, packaged, and loaded into a refrigerated van, delivered on that day or no later than the next day. Slash Creek oysters are available in several Outer Banks restaurants and seafood retail shops.

Just as the taste of wine is influenced by the soil and climate in which grapes are grown (called terroir), the oyster’s distinct flavor reflects where it was grown (merroir). Slash Creek oysters benefit from an infusion of salty ocean water from 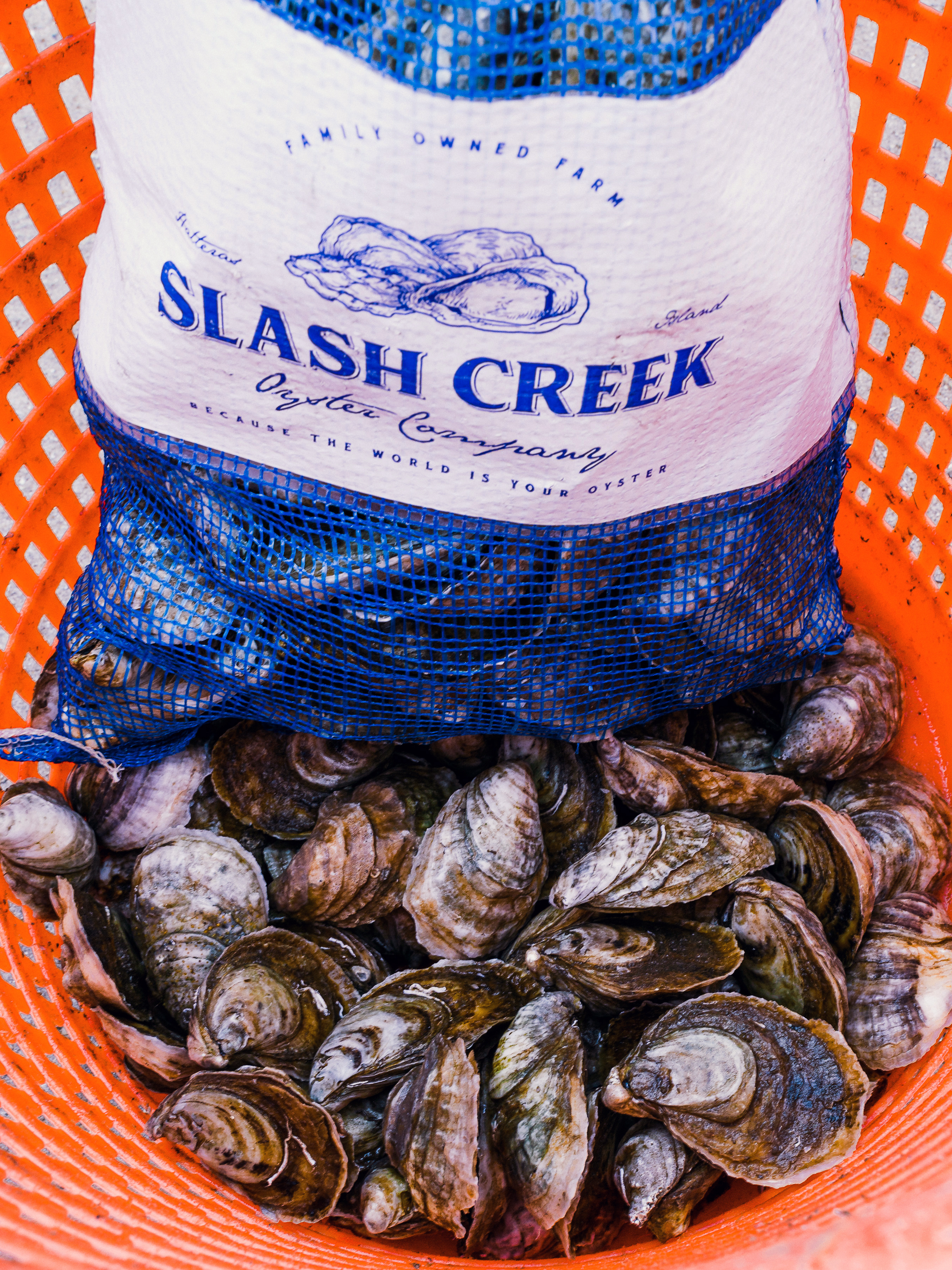 Hatteras Inlet which is balanced by the briny waters of the Pamlico Sound. Katherine and her customers believe Slash Creek’s plump oysters with their clean, salty taste are the best. “There is much satisfaction derived from taking something from seed and growing a tangible product,” she says. “It’s rewarding to watch the oysters grow and to provide something to people that brings them pure joy.”

Oyster farming is labor intensive, dirty, stressful, and influenced by unpredictable and uncontrollable situations, such as storms, disease, and failed seed crops. “I’m filthy at the end of the day,” says Katherine. “And some days are so cold on the water, I feel like my fingers are freezing. But then there are other days on the water that are magical, and on those days, I feel like the luckiest person in the world.”