Find this article at:
go.ncsu.edu/readext?862089
— Written By Kimberly Armstrong 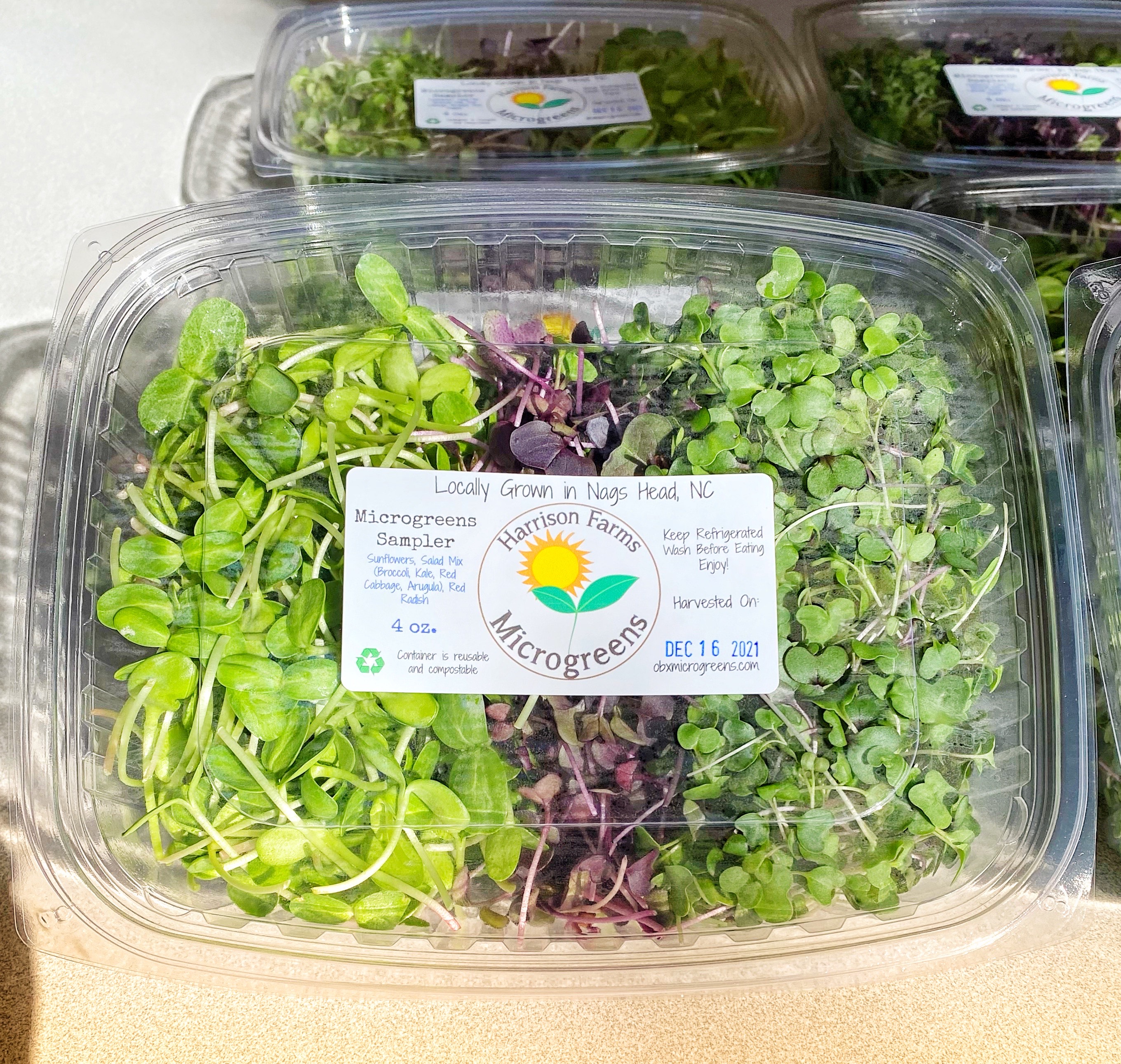 A microgreen is the new, tender shoot of a vegetable, flower, or herb plant – essentially miniature versions of their mature counterparts (such as broccoli, lettuce, or kale). Harvested at the first true leaf stage, they are concentrated with beneficial vitamins, minerals and enzymes. In fact, they’re 40% more nutritious and intense in flavor than the full-grown plants. These delicate mixed greens enhance salads, sandwiches, wraps, soups, and casseroles with vibrant color, texture, and taste. Blended into a smoothie, added to an omelet, or dropped by the handful on a pizza, they’re a superfood that is super versatile.

Frustrated with often wilted, unappetizing store-bought microgreens and wondering where they were grown, whether chemicals were used, how long they spent on a delivery truck or shelf, Brett decided to try growing them himself. “Even as a young boy, I liked the idea of growing things, so the idea resonated with me,” he says. He took in a few YouTube videos, scrolled through online suggestions and tips, and read some books. It was time to unleash his inner farmer.

He filled a planting tray with soil, sowed a dense covering of seeds, watered, and covered the tray. After about three days, the seeds germinated, a reminder that no matter how many times it happens, growing plants from seed is a magical experience. Exposed to light, the tiny plants began to shoot up. In just a matter of days, he had a bumper crop of microgreens. So, as any successful (and generous) gardener will do, he shared the bounty with friends. His friends liked them. And their friends liked them, too, and soon word got around and people began asking, “Can we buy these?”

Brett’s initial thought was to experiment and simply grow microgreens for his family; he hadn’t considered the idea as a potential business opportunity. But the more he thought about it, the more he realized how much he enjoyed the process. “It was like a system and that appealed to me,” he says. “And I liked the rapid turnaround on the plants. It seemed like it could be a fun business.” And that is how Harrison Farms Microgreens came to be.

A swath of farmland, or even a garden plot, isn’t necessary for growing microgreens, which is a good thing since Brett’s Nags Head home is surrounded with sand. He, along with his assistant, Elizabeth Bradley, grow the microgreens in a clean, climate-controlled grow room as well as in a greenhouse. The grow room is equipped with a heater, an air conditioner, and a dehumidifier, all necessary to maintain a constant temperature in the mid-70s and to ensure consistent crop growth. A fan promotes air circulation, keeping mold at bay. 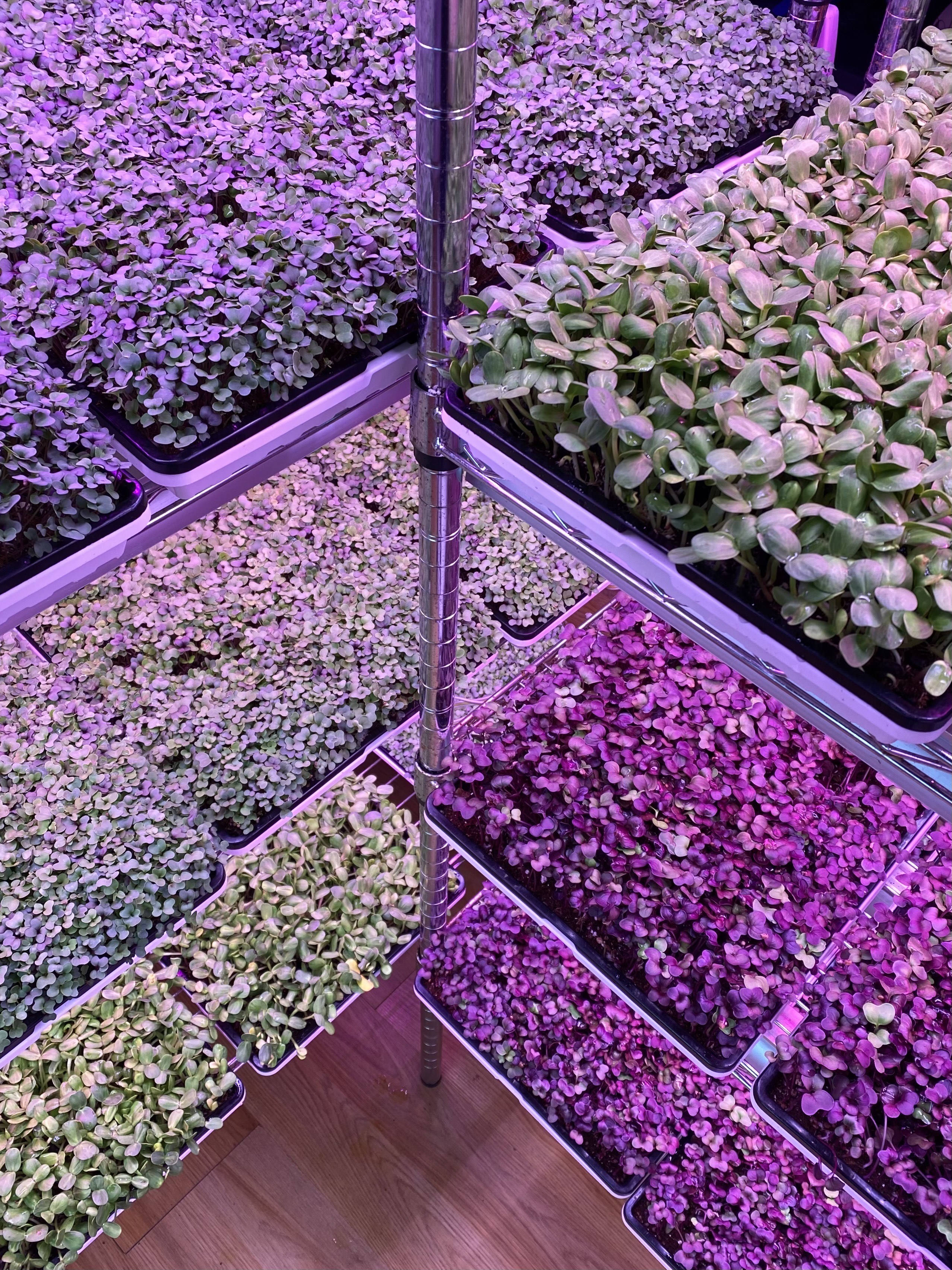 Brett blends a custom potting mix, adding coco coir to help retain moisture, and purchases high-quality seeds in varieties including sunflower, red radish, broccoli, kale, arugula, basil, and cilantro. Harrison Farms is a pesticide and herbicide-free operation. After each harvest, the growing trays are emptied, scrubbed, and sanitized for reuse (the soil is not reused due to nutrition depletion and risk of contaminants). Natural sunlight is utilized, when possible, supplemented with high-efficiency LED lighting which casts an otherworldly magenta glow over the racks of neatly arranged growing trays. Solar panels supplement electric needs for the business. 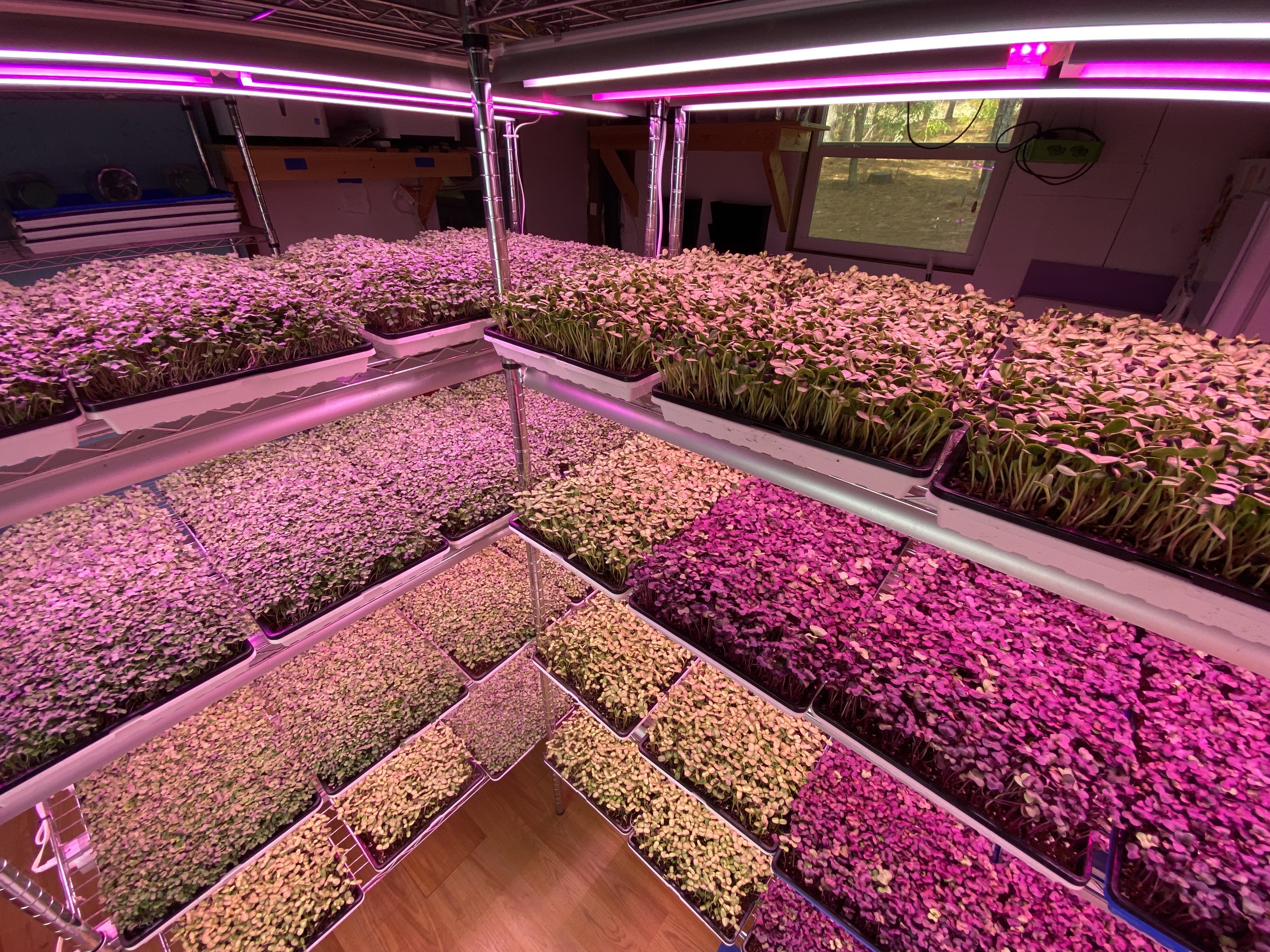 From seed to harvest, most of the greens have an 8-day turnaround, while varieties such as basil and cilantro take 2 – 3 weeks to reach the microgreen stage. Harvesting involves cutting the stems of the tender plants as close to the soil as possible. In the early days, Brett used scissors or a knife for this task. He’s now in possession of an innovative, motorized harvesting tool that saves significant time and labor and provides a smooth, clean cut as a rolling macrame brush gently tumbles the greens into a bin. “It’s an expensive tool,” he says, “but it’s worth its weight in gold.” Once cut, the greens are washed, dried, and packaged in a compostable corn-based container, and refrigerated.

Brett admits that he obsesses about the freshness factor, so he strives to deliver them as soon as possible after harvest. Since the microgreen plants are young, they have a shorter shelf life and are best consumed within 7-10 days.

On one occasion, he ended up with several excess boxes of microgreens. He considered what to do. Would the local Beach Food Pantry be interested? The answer was a resounding “Yes!” That was such a feel-good moment and something that he realized he needed to continue. Since then, he regularly plants extras for weekly donations to the Pantry.

Harrison Farms Microgreens are available at Secotan Market (Wanchese) and Dowdy Farm Market (Nags Head). There are ordering and subscription services on the website (obxmicrogreens) with home delivery service. They’re also available for pre-order and pick-up at Shine On Juicery in Kill Devil Hills. 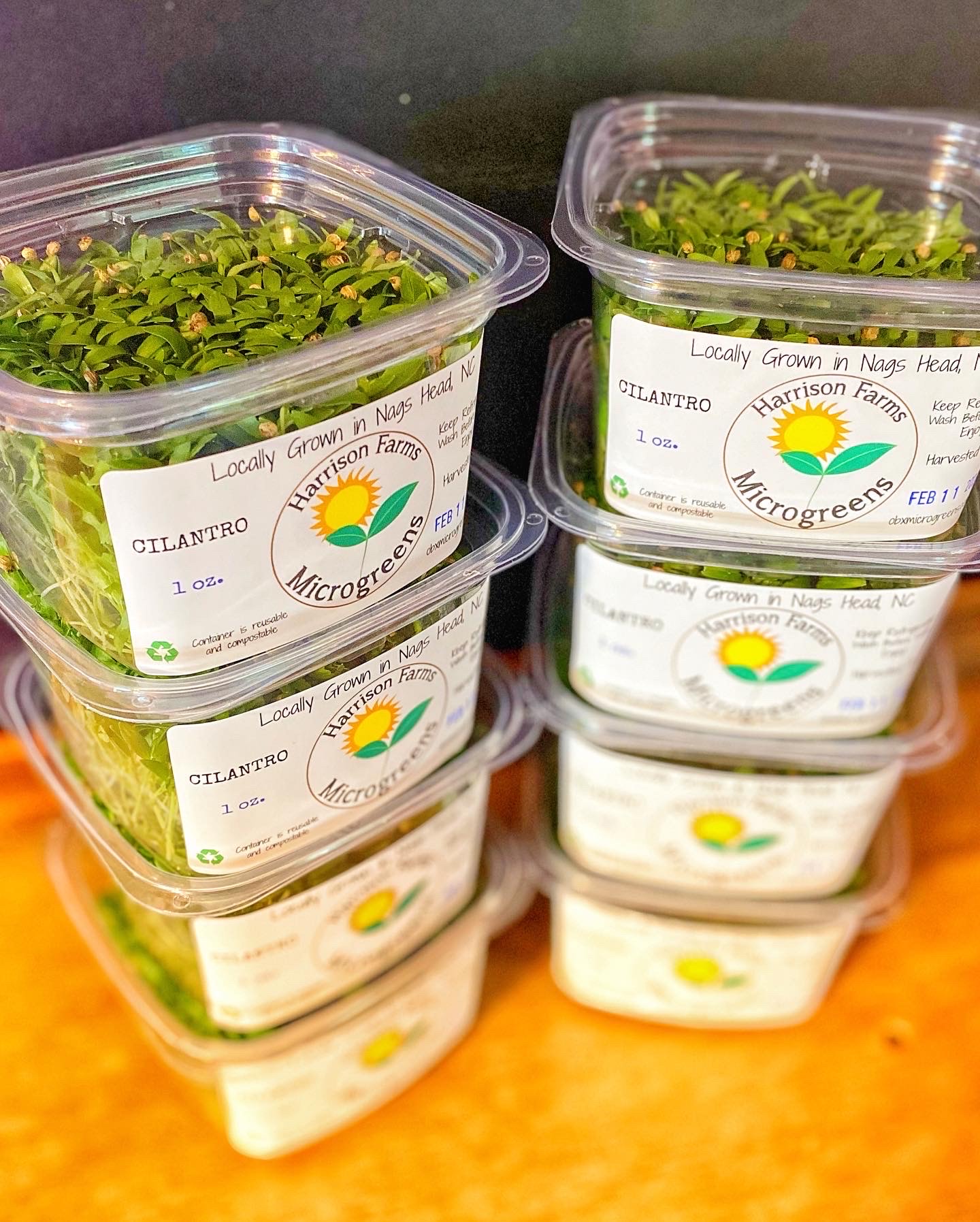 “At our home, microgreens are always on the table, just like the salt and pepper shaker. They become a part of every meal,” Brett says. He’s happy that he pursued the idea of growing his own microgreens. And the Outer Banks community is quite happy about that as well. 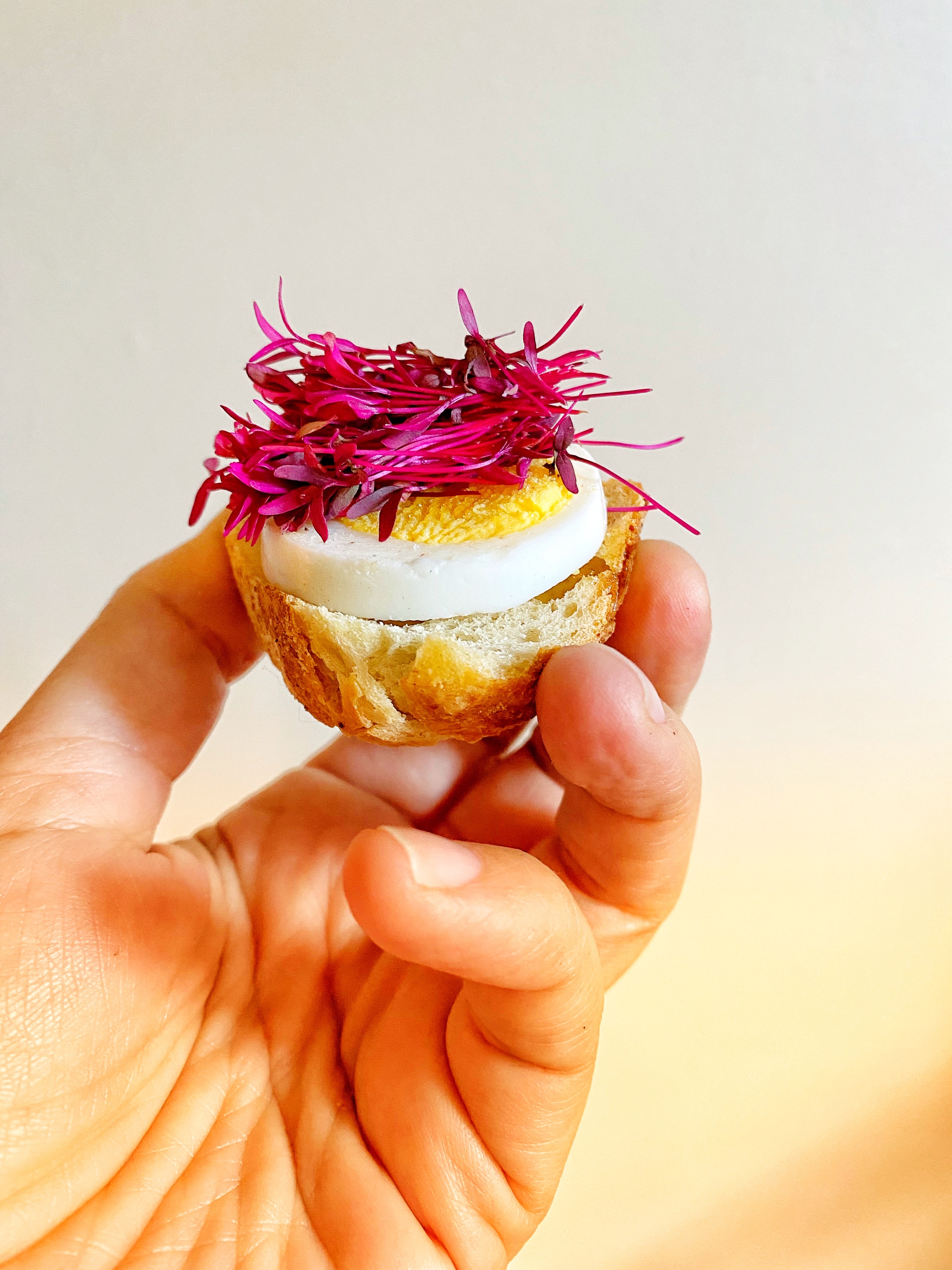