Find this article at:
go.ncsu.edu/readext?867477
— Written By Kimberly Armstrong

Are you in need of a SCOBY? You are if you’re planning to brew a batch of kombucha (kom-BOO-cha). SCOBY is an acronym for Symbiotic Culture of Bacteria and Yeast. And in case you’re unfamiliar with kombucha, it’s an increasingly popular beverage made from fermented, sweetened black and/or green tea, bubbling with probiotics and antioxidants. 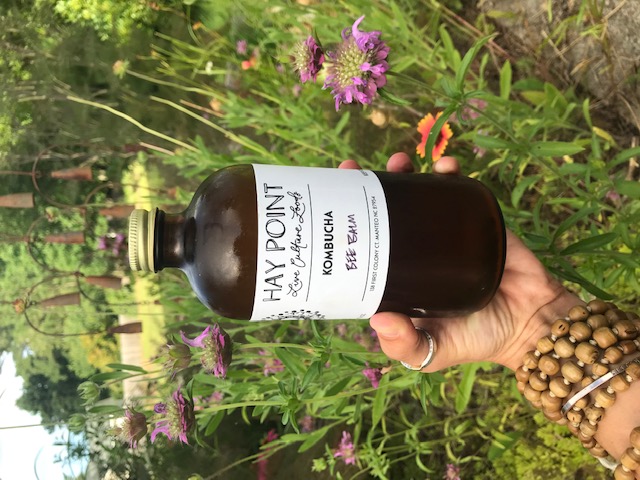 Owen Sullivan is never without a SCOBY. And there’s always a vat of kombucha brewing in his backyard “fermentarium.” His company is Hay Point Live Culture Foods which along with kombucha, produces fermented local vegetables, sour tonics, and other non-alcoholic fermented offerings.

When Owen was 15 years old, he received a Christmas present that would ultimately influence the course of his life. It was a book titled, “Wild Fermentation: The Flavor, Nutrition, and Craft of Live Culture Foods” by Sandor Katz. Owen was captivated. The book, brimming with recipes and methods regarding a variety of fermented foods and beverages, stoked his natural sense of curiosity and further ignited his already established passion for cooking and experimenting. Delving into this culinary adventure, he created batches of sauerkraut and kombucha and was delighted with the magical aspect of just letting things happen, celebrating the sometimes-unpredictable nature of it all. 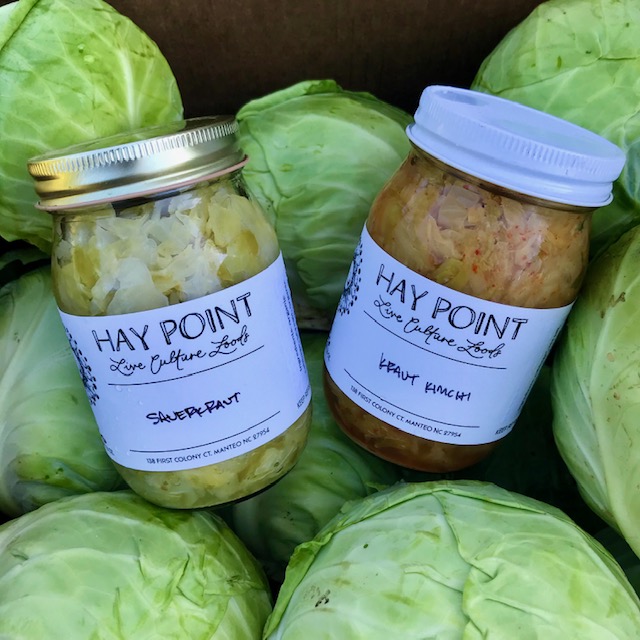 In college he experimented with brewing beer and later worked at a local brewery where he not only learned about craft beers, but was educated on the important rules and regulations regarding sanitation. All along, he continued to hone his fermentation skills at home. “I liked that I was producing healthy food and beverages,” he says.

Finally, no longer able to deny his passion, he left the brewing world and on a shoestring budget boldly started his fermentation business, renting space in a local restaurant. “I was producing wonderful products, but I lacked a sufficient way to market them,” he says. Enter Secotan Market. Eric Soderholm (Island Farm and Croatan Gardens, Roanoke Island) and Frederick Inglis (Somerset Farm, Edenton) established the farmers’ market in Wanchese. “Secotan Market was a business incubator,” says Owen. “I credit Eric and Fred with providing me the opportunity and place to sell my products.” At the market, Owen could meet people, educate them (he conducts workshops), and let them sample his products. “It generated a strong sense of community and allowed me to build relationships with customers and with people I could source from.”

Fermentation is one of the oldest forms of food preservation with the simplest method involving salt, water, and time. For thousands of years, vegetables have been preserved in this manner to provide food through the fall and winter. Live-cultured foods, naturally fermented, offer increased nutritional value and complex tangy, sour, and sweet flavors. 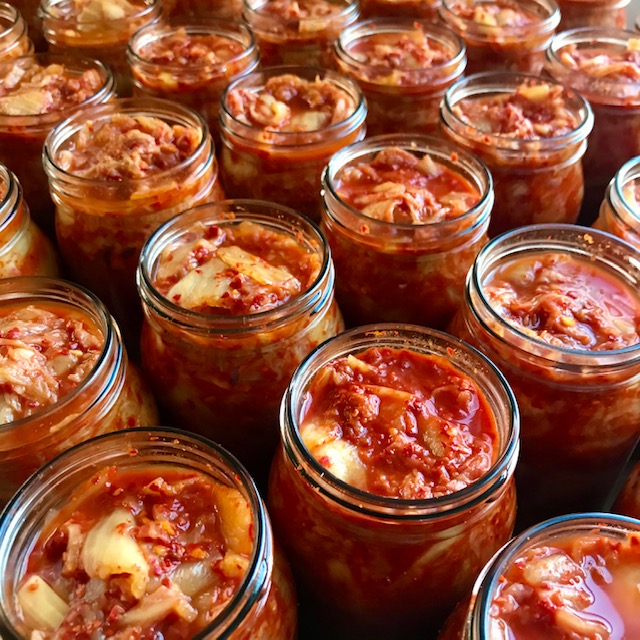 “Fermentation of vegetables requires an environment that has the right amount of salt – which is about 2 ½ – 5 percent by weight of the vegetables,” says Owen. The vegetables are submerged in a salt brine which inhibits unfriendly bacteria, fungus, and mold that contribute to decay. Salt-tolerant microbes consume the oxygen in the liquid, creating an anaerobic environment. The probiotics (the good guys) convert the carbohydrates to sugar which are then broken down into lactic acid. “The increasingly acidic environment is what preserves the vegetables and provides the desired flavor – it’s what makes sauerkraut and pickles sour.”

Owen utilizes only farm-fresh, local produce from Croatan Gardens or Somerset Farm. Radishes, cabbage, cucumbers, carrots, green beans, okra, squash, and even herbs such as cilantro and basil are part of his fermenting repertoire. Wondering how to use fermented cilantro? Blended into a paste it can be added to salsa or used as pesto. 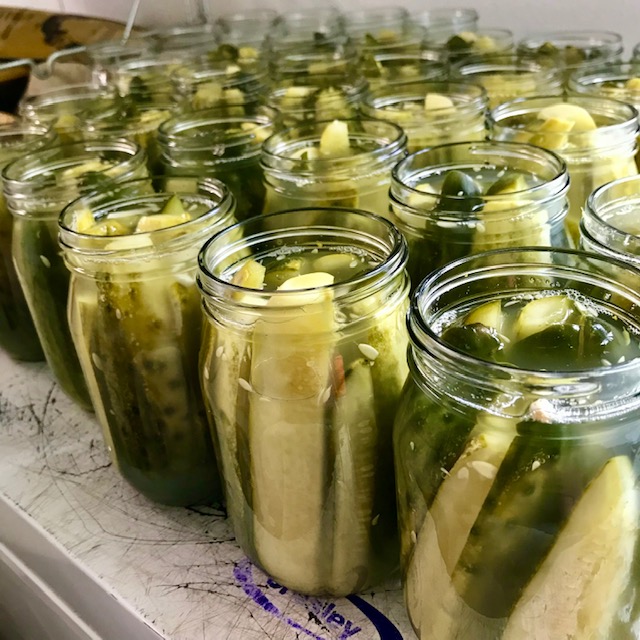 “Cucumbers take the least amount of time to ferment – three to seven days for pickles, resting at a temperature a little cooler than 70 degrees to keep them crispy,” he says.

Kimchi is a traditional Korean sour, spicy dish typically made with fermented cabbage and radishes. Owen has transformed many a Napa cabbage into this delectable fare and it’s his market’s most popular item. But sometimes he likes to mix it up and uses summer squash, cucumbers, or pickling melon in place of the cabbage, seasoned with chives, garlic, ginger, and Korean pepper flakes for an unexpected variation.

His favorite ferment is sauerkraut. “It’s the first thing I made that turned out well,” he says. “There’s just something about cold, crunchy sauerkraut, especially in the summertime.” He likes the simplicity of it – cabbage, salt, and caraway.

Meanwhile, back at the fermentarium, there’s a batch of half green and half black organic tea sweetened with sugar that has been brewed and cooled. In goes the SCOBY. This blob, with its complex mixture of probiotic organisms, breaks down the sugar and tannins in the tea and turns them into acids (acetic and lactic), vitamins & enzymes, and a negligible amount of alcohol (no more than 0.5% alcohol by volume). Naturally occurring gases add carbonation for a bit of zing.

The mixture is transferred to 5-gallon kegs where it serves as a blank canvas for various combinations of herbs, flowers, fruits, and/or vegetables. Hearkening back to his 15-year-old self and his inspirational book, Owen lets his imagination run wild and follows his instincts to jazz up the mixture, allowing it to ferment into a state of deliciousness. 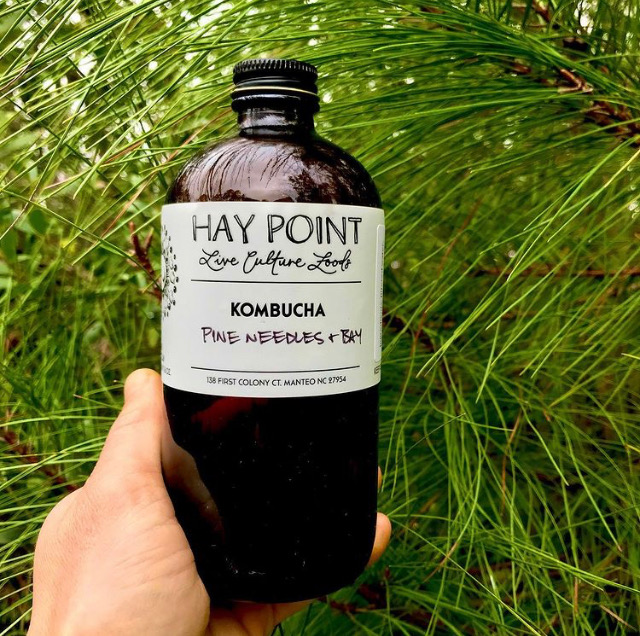 For instance, he creates Carrot Cake Kombucha. A scrumptious concoction made with freshly-juiced carrots, whole vanilla bean, and allspice. And there are other equally delightful offerings, such as Ginger and Hibiscus; Blueberry and Lemongrass; Pear and Lemon; Honeysuckle; and Cucumber and Lemon.

Comprising a somewhat niche market, Owen realizes his products do not appeal to everyone. “They’re never going to be crazy popular,” he says. “But I’m okay with that. It kind of makes it more attractive and interesting. Besides, the people who like it, REALLY like it.”

Hay Point Live Culture Food products can be found at Secotan and Dowdy farm markets. “Being a small producer, that’s what I focus on – selling at the market myself,” says Owen. There are several Outer Banks shops and restaurants that offer his products, including Front Porch Cafe and Trio. “It keeps things moving in the winter when there aren’t as many markets and serves as advertising for the brand.” In addition, he makes weekly deliveries to individual customers. 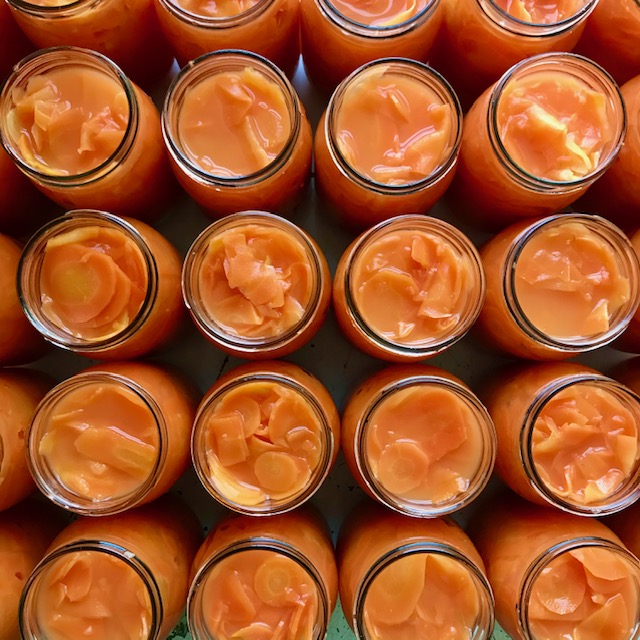 What most appeals to Owen about fermentation is the experimentation element – he embraces the intersection of science and alchemy with wild enthusiasm. He continues to learn, improve, and explore and remains inspired by the knowledge and wisdom found in the book he received nearly 20 years ago. It seems that treasured book is the gift that keeps on giving.