Find this article at:
go.ncsu.edu/readext?872278
— Written By Kimberly Armstrong

Don Babin is a busy man, as busy as the bees in the 25 hives he keeps on the Outer Banks. From Manteo to Corolla, and every beach town in between, he oversees the care and maintenance of thousands of bees – 50,000 to 60,000 per hive.

When it comes to beekeeping, dare we say, Don is the bee’s knees. With 60 years of experience, he knows the buzz about bees. As an agriculture student at the University of New Hampshire and later at the University of Iowa he assisted in research of honey bees (while earning a whopping $1.50 an hour). After school, he established a beehive business providing honey bee pollination services for blueberry crops, apple orchards, and various vine crops in New Hampshire. Honey bees help maximize the pollination process resulting in better yield and value from crops. His reputation as an apiarist grew along with his business, leading to the establishment of 150 hives. He continued as a beekeeper until he retired (for just a bit) and eventually settled on the Outer Banks where, unable to resist, he re-entered the wonderful world of bees.

Honey bees in the United States are a diverse blend of races introduced from Europe, the Middle East, and Africa. Most beekeepers choose from Italian, Carniolan, or Russian bees. Don’s bees are Italian which are favored for their gentleness and manageability.

Langstroth SystemHe houses his bees in vertically stacked modular boxes known as the Langstroth system. Here the bees have space to move around, and the colony is insulated from the weather and protected from predators. It’s the next best thing to a hollow tree. The frames that support the sheet of comb on which the bees will do all their work fit neatly in the boxes. 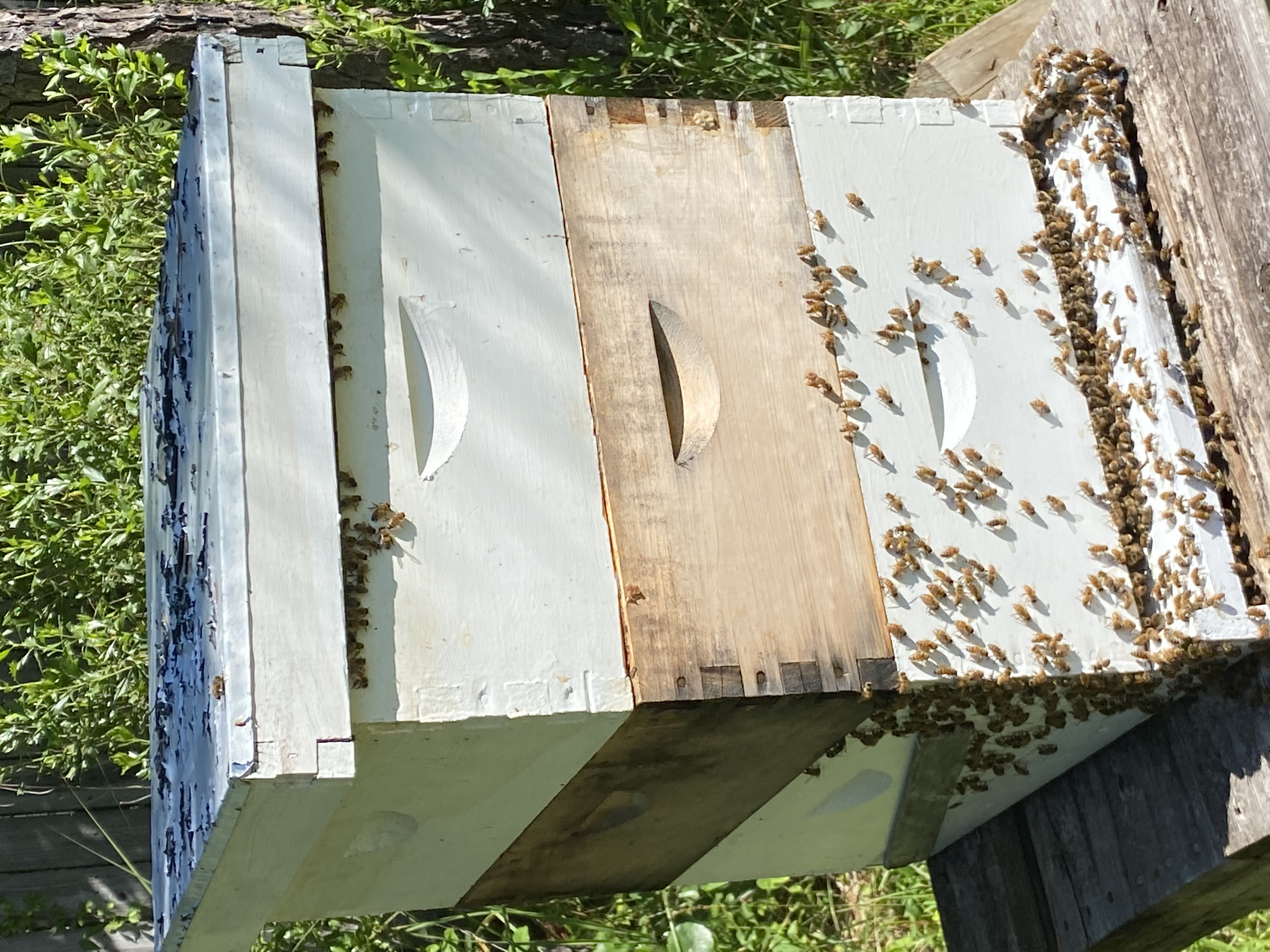 Every 10 – 14 days, Don heads out in his pick-up truck, collects his friend Jimmy Daily, and they set off to conduct hive inspections, rambling along from town to town and hive to hive. 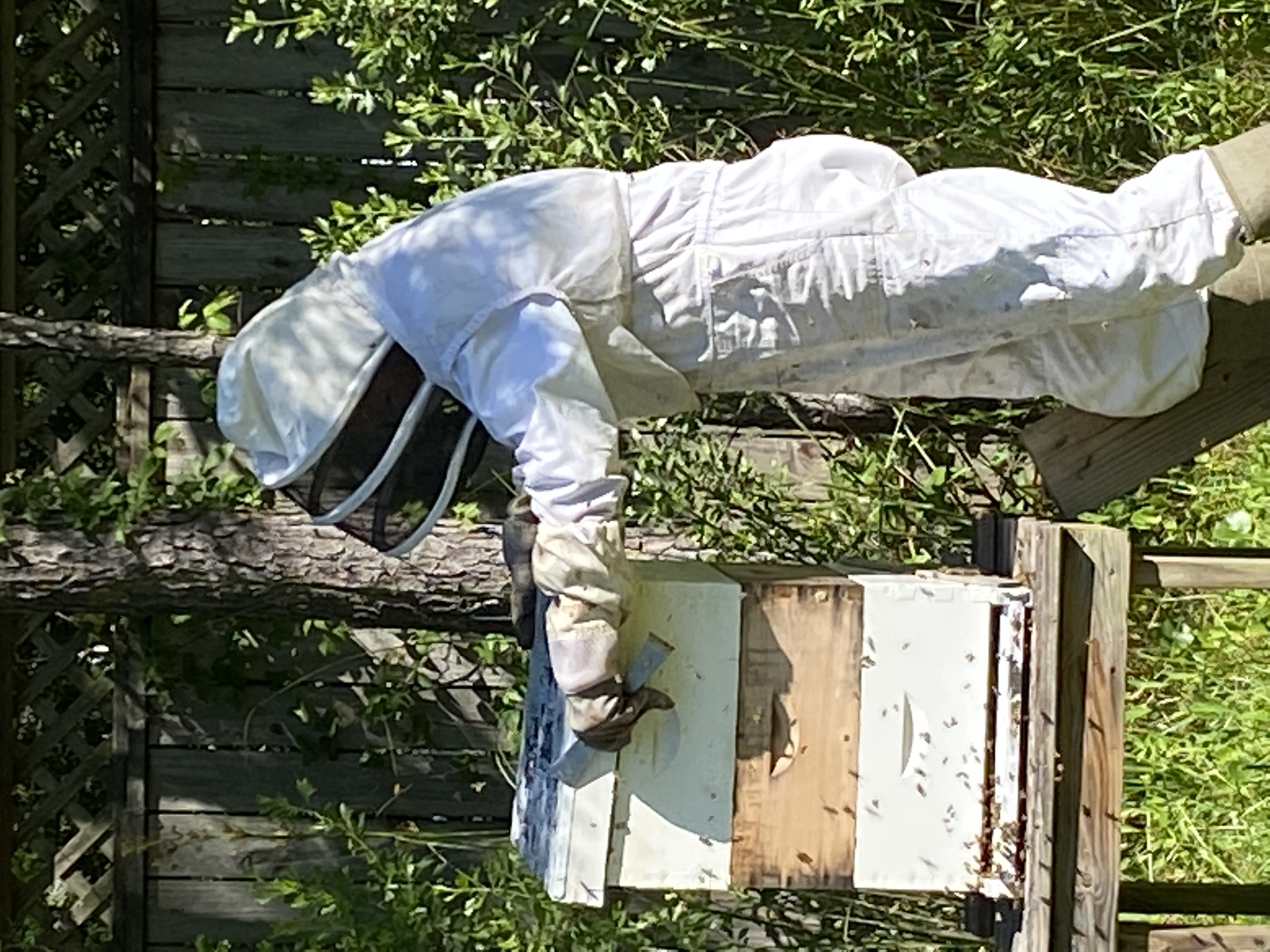 Don approaches a beehive smartly decked out in head-to-toe protective beekeeping attire, a must-have to avoid stings. He pumps the bellows of the bee smoker and soft puffs of smoke hover over the hive. The smoke creates a calmness among the bees, making them less defensive, allowing him to safely accomplish what he needs to do.

Employing a hive tool, a metal bar, to remove the frames (which are often sticky) in the honey super where excess honey is stored, he can assess the honey production. This past spring, he collected 276 pounds of honey. But the welfare of the bees is ever uppermost in his mind. “In the fall, I make sure they have plenty of honey for the winter. The worst thing you could do is not leave the bees with enough honey. As we get closer to the winter, I will not extract the honey because I want to make sure they have enough.” And he will prepare his hives for colder temperatures by wrapping them in black landscape fabric, which is porous and absorbs the heat, ensuring his bees will be warm and cozy. 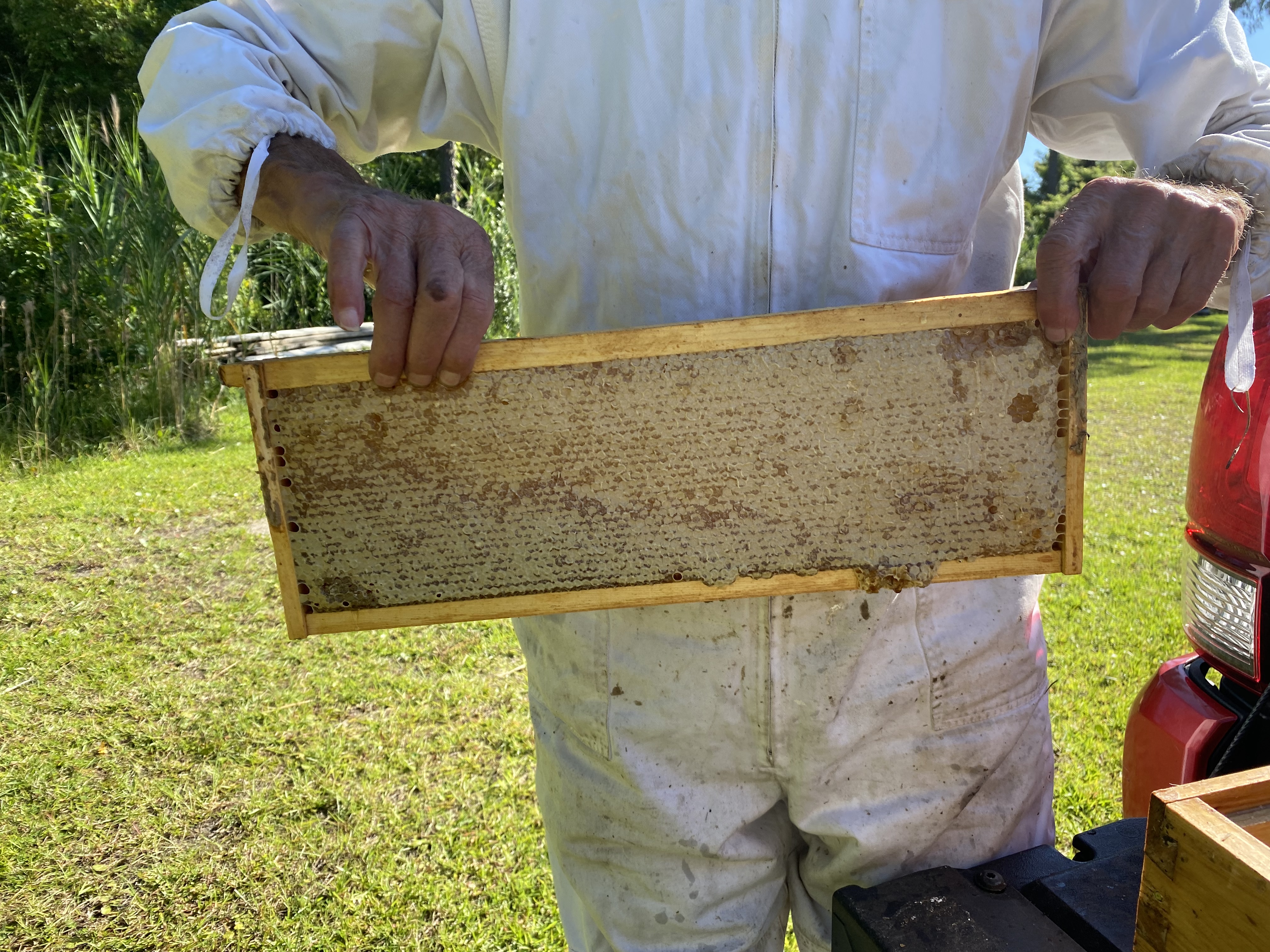 A frame full of honey covered in wax cappings.

He checks the lower box which contains the brood chamber, or nursery, where the eggs, larvae and pupae develop as they feed on pollen, nectar, or honey. During inspections, Don is always on the lookout for the dreaded varroa mite – a parasitic mite that will feed and live on a honey bee, as well as feed and reproduce on the developing brood. He can detect symptoms quite quickly and will safely medicate the hive to protect it from the mite. “If you wait too long to treat, it’s very difficult to save them,” he says.

Don checks in on the queen, careful not to disturb her highness as the loyal worker bees buzz around, catering to her every need. They have been engaging in this behavior ever since she was a mere larva enjoying a diet of royal jelly (a protein-rich secretion from glands on the heads of young workers). We can’t say that this little lady is undeserving – the future of the colony depends on her. Laying up to 1,600 eggs a day is no small feat!

Visiting and inspecting all the hives takes 2 – 3 days. Back at home, Don will begin extracting honey from the frames he retrieved from the hives. He uses an electric, heated uncapping knife to remove the layer of wax that covers the honey. “There’s an art to running the knife across the wax just so,” he says. “You don’t want to lose any honey.” He places four frames at a time in the hand-crank extractor and the honey harvesting begins. Utilizing centrifugal force, the frames are spun, and the honey is extracted from the combs, collecting in the bottom of the drum where it can be released through a tap and into a bucket. The honey is run through a filter and bottled into one-pound jars with handmade labels. 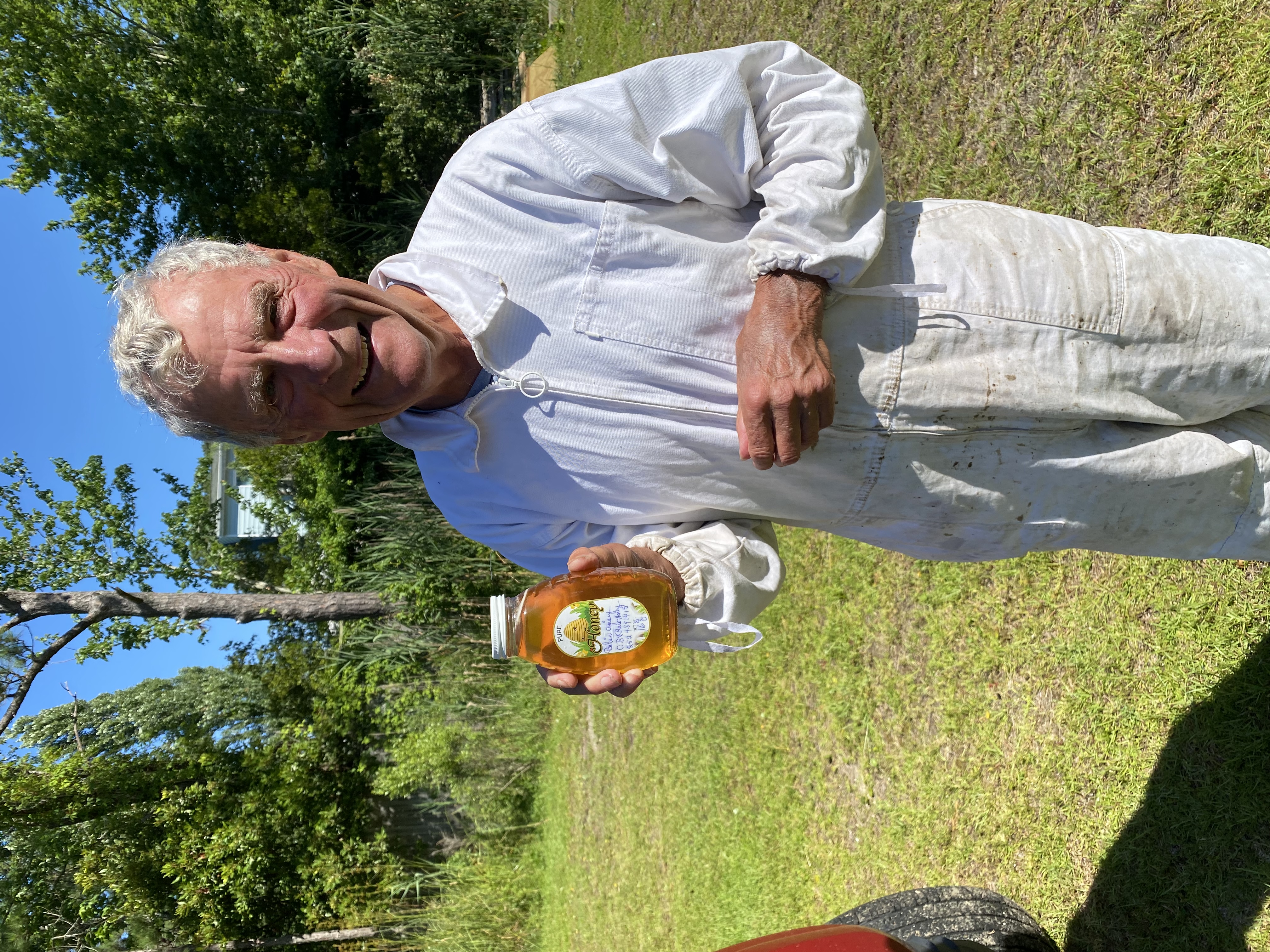 “I have a passion for beekeeping,” Don says with an enthusiasm and energy that belie his 85 years. “One of my biggest pleasures is just watching them. I’m so intrigued by them. They have their system and there doesn’t seem to be any squabbling going on, they just do their job.” He’s quiet for a moment and then speaks with earnestness. “I tell people that if we could work and get along like bees do, it would be a lot better world.”

Such a wise observation and sweet sentiment. Sweet as honey.