Find this article at:
go.ncsu.edu/readext?877854
— Written By Kimberly Armstrong

Brandon Fearns was a rock-flipping, bug-catching, lizard-chasing kid. “Always walking with my head down, looking at the ground for critters,” he says. In this manner, he inevitably met up with mushrooms. And while he was entranced by the teeming life discovered beneath those flipped rocks, it was the magic and mystery of those mushrooms that truly cast a spell.

Mycology is the study of fungi, a group which includes mushrooms. Mycelium is the vegetative part of fungi and the network of threads from which mushrooms grow. Mushrooms are considered the fruit of mycelia (plural of mycelium). 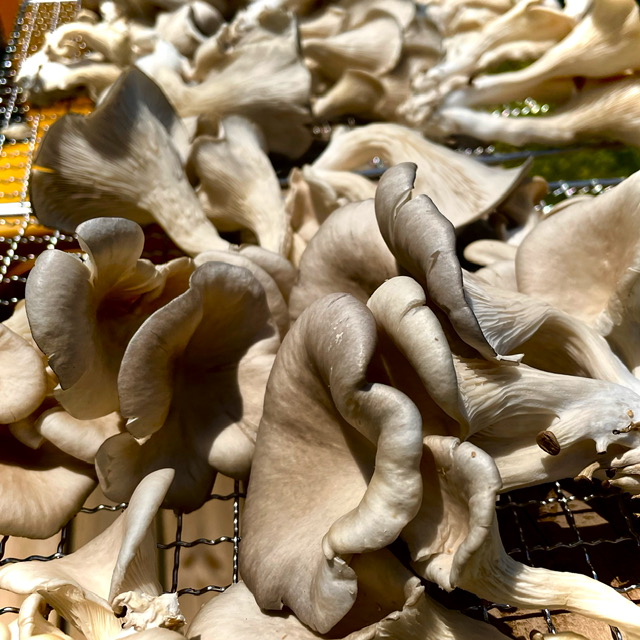 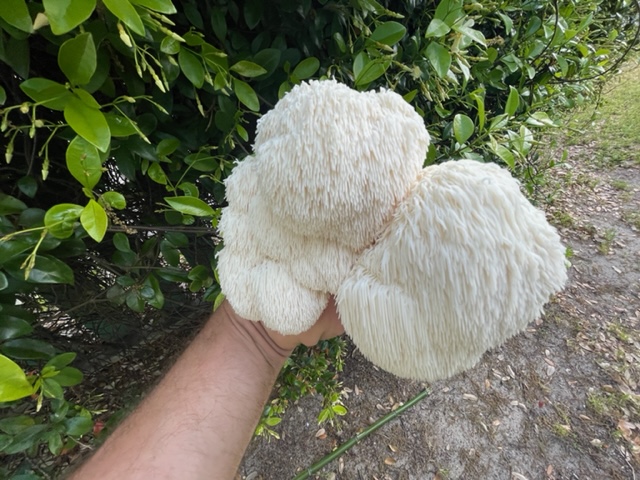 Brandon’s curiosity and desire to learn about these fascinating fungi, led him to seek information from experts in the field such as mycologists Tradd Cotter and Peter McCoy. He read their books, studied their research, and developed an in-depth understanding of mushrooms. He completed a hands-on course where he received instruction on such things as fungi identification, gill printing, toxicology, and food safety. The class ventured into the forest collecting and identifying specimens. Brandon successfully completed the intensive nine-hour exam that followed, earning state certification as a wild mushroom identification expert. Among other things, the certification allows him to forage and sell wild mushrooms.

When not meddling with mushrooms, Brandon reports to his job as a land surveyor. Out in the field, much to his delight, he encounters mushrooms on a frequent basis. It was an auspicious day when he discovered his first Lion’s Mane. This large, shaggy, white mushroom is said to mimic the taste of lobster or crab meat. He decided to put this claim to the test, shredding and fashioning the mushroom into a crab cake. The verdict? “It was delicious!” he says. “And it really tastes like crabmeat!” He vowed to find another Lion’s Mane with the intention of cultivating it. Two years passed before he finally stumbled upon one in Southern Shores. 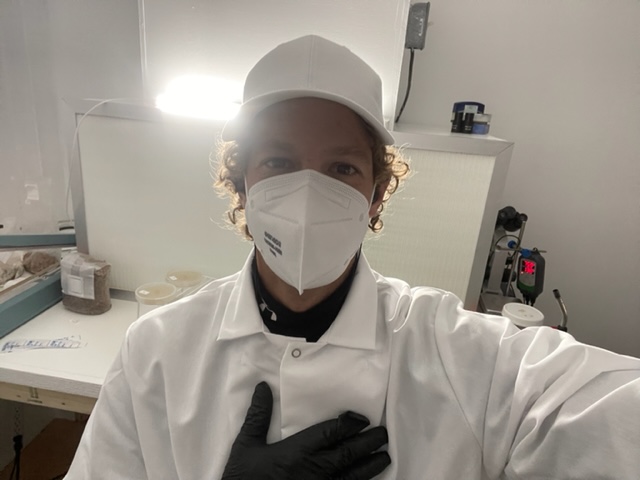 Brandon in his home lab

Brandon’s home is equipped with a climate-controlled lab. This dedicated space is outfitted with a flow hood, which is used to prevent contamination and provide a sterile environment, and a medical grade HEPA (high efficiency particulate air) filter that filters out 99.9 percent of mold, bacteria, and dust particles. Here, he is in his element. Passionate about local mushrooms – Reishi, Oyster, and of course, Lion’s Mane – he collects samples of them for cultivating. “Something about harvesting directly from nature and then profiting from that has never felt quite right to me,” he says. “I can take just a tiny bit of a mushroom, bring it to the lab, and grow pounds and pounds from that. That feels like reciprocity to me.”

Cultivating mushrooms (essentially, cloning) is a complex process requiring strict attention to details. An abbreviated explanation might go something like this: Working in front of the flow hood, Brandon creates a nutrient broth with Agar-agar (a seaweed extract) in a sterile petri dish along with anti-biotics to ward off bacteria, adds a piece of mushroom, and makes a spore print. A series of steps involving elements that are isolated, soaked, germinated, boiled, heated, hydrated, and/or sterilized follows. The final stages involve the mycelium being introduced to rye grain, triggering colonization. This substance is later divided among bags of hardwood sawdust, eventually fully colonized, and a hole is cut in the bag, allowing mushrooms to grow.

“It never gets old,” says Brandon. “There’s always something new to learn. Mushrooms have always been my lens to understanding nature more deeply.”

The more Brandon learned about mushrooms, the more interested he became in their medicinal and health benefits. A favorite book is “The Fungal Pharmacy: The Complete Guide to Medicinal Mushrooms and Lichens of North America.” He completed a course taught by the author, Robert Rogers, which explained how mushrooms benefit health, the immune system, and overall well-being. “Thinking about the possibility of being able to offer something helpful to the community, it really started to feel like a treasure hunt at that point.” he says. 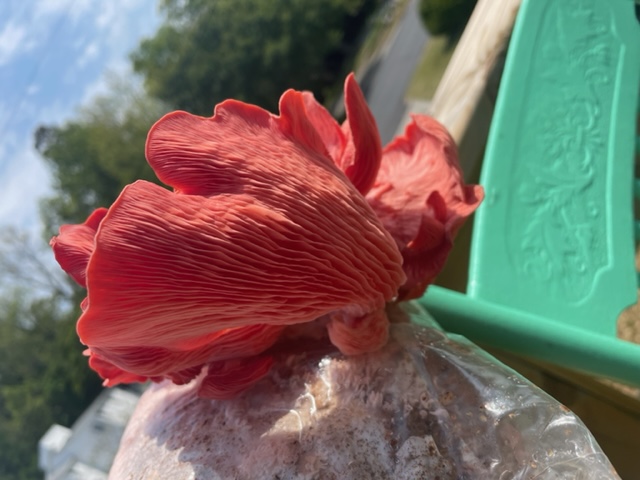 Mushrooms have been eaten and used as medicine for thousands of years. Considered highly nutritious, they provide important nutrients such as: selenium, potassium, riboflavin, niacin, vitamin D, proteins, and fiber. As far as their healing capacities, the local mushroom species which Brandon utilizes have been effective in the treatment or management of some diseases and bodily functions: 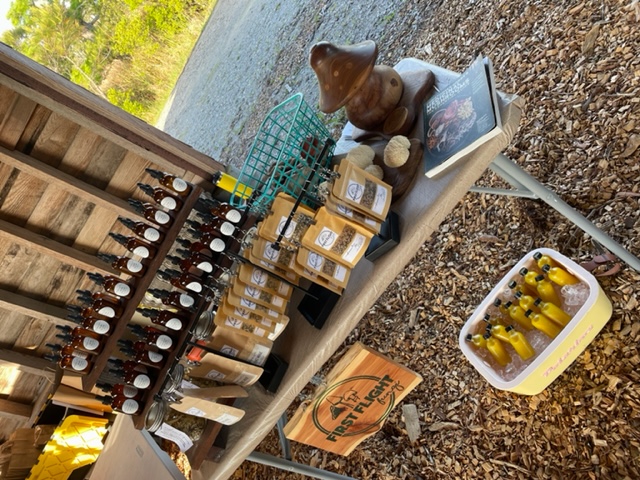 On a classic, blue-sky, Outer Banks day, the farmers market bustles with activity. Curious shoppers meander to First Flight Fungi’s stall where Brandon welcomes them with enthusiasm, amid displays of the variety of items he has created, eager to engage them in a conversation about integrating mushrooms into a daily routine for improved health and wellness. Bottles, jars, and paper pouches feature mushroom extracts in various forms. There are teas, such as one that boasts a mix of yaupon holly spring tips, Lion’s Mane, and lavender. (One teaspoon added to a cup of nearly boiling water sets the stage for a quiet time of meditation). There are tinctures, soup mixes, fresh and dried mushrooms, and adaptogen shots – a variety of fresh squeezed juices fortified with mushroom extracts. Customers can sip a refreshing cup of Lion’s Mane Lemonade while browsing the intriguing array of items.

“I love being in touch with the local people,” says Brandon. “Growing mushrooms, enhancing lives, and adding value to the community, that’s what makes me happy.”

And so, it seems the magic and mystery of mushrooms still lingers, with Brandon remaining firmly under their spell.