Find this article at:
go.ncsu.edu/readext?906553
— Written By Kimberly Armstrong (1 month ago)

Literally and figuratively speaking, Eric Soderholm digs dirt. He waxes eloquently about organic matter, nitrogen levels, loaminess, and something called cation exchange capacity which measures the ability of soil to bind and store a particular group of nutrients by electrical attraction. He diligently collects soil samples and eagerly awaits the analysis to determine whether amendments, such as mushroom compost, proved worthwhile. He knows that cultivating healthy, thriving plants begins with healthy soil.

After studying sustainable agriculture at Warren Wilson College, Eric designed a personalized graduate school program for himself. He set out on a journey, traveling along the coast from North Carolina to Massachusetts, working on farms, adding to his knowledge of agricultural operations, all the while formulating ideas for the career he wished to pursue.

“It was at Somerset Farm in Chowan County,” he says, “where I fell in love with this area and grew to appreciate the agricultural history.” He observed the sustainable farming practices of the family-run farm and gleaned insight regarding typical farming issues, such as weather, soil, pests, disease, and weeds. By far, the highlight of his time there was the relationship he established with Frederick Inglis, the owner of Somerset Farm. “Frederick became my mentor and remains one of my closest friends,” Eric says. 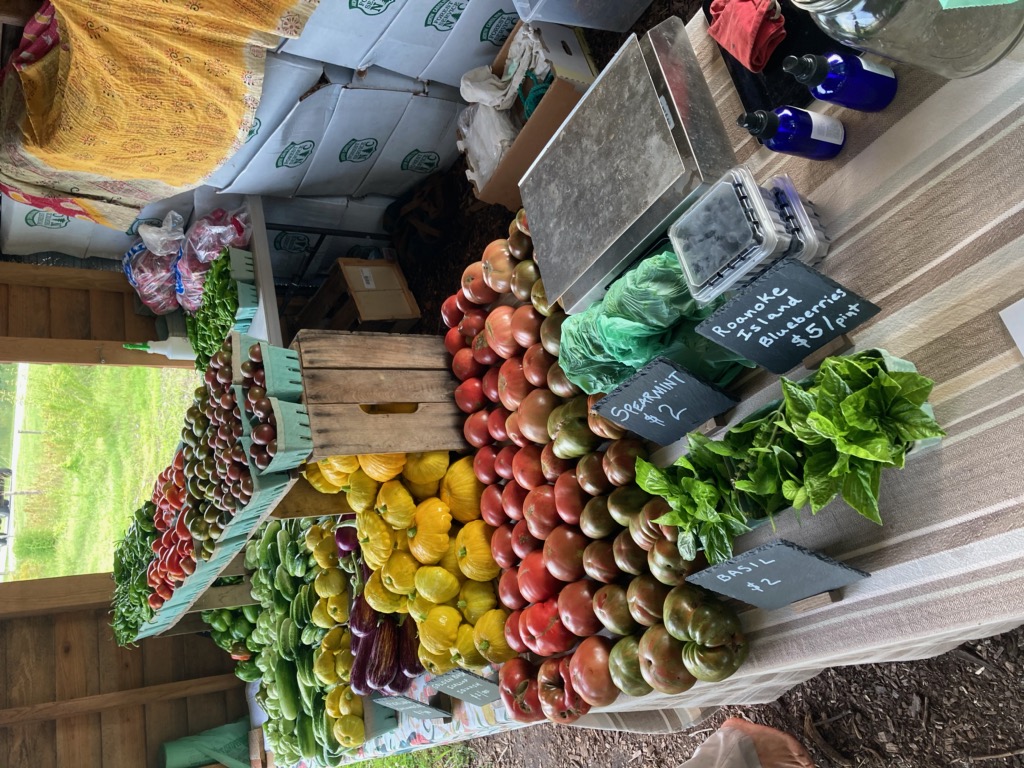 While at Somerset Farm, Eric traveled on the weekends to the Manteo Farmers Market to sell the farm’s produce – tomatoes, peppers, peas, Swiss chard, cabbage, zucchini – all manner of fresh vegetables. During his frequent visits to the market, he became acquainted with a pottery vendor there. And on one fateful market day, he met the pottery vendor’s daughter, Ladd Bayliss. “Ladd had spent some time traveling out West and had acquired some farming experience,” Eric says. “Some of our first conversations were about this idea of building a little patchwork garden business. We both believed in the importance and benefit of growing food for your community in your own community – offering healthy food that’s not coming from several hundred miles away.” And thus, their story began. Eric and Ladd (now married) are the co-owners of Croatan Gardens, an agricultural business on Roanoke Island. 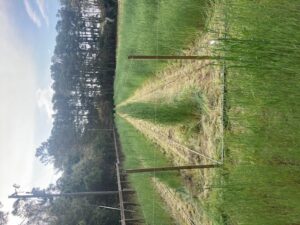 Croatan Gardens leases two parcels of land – one located in Wanchese and the other on Etheridge Road in Manteo. The three-quarter acre lot on Etheridge is the primary garden and is situated by the home of Betsy Brown whose family has owned the property for generations. “Betsy was thrilled about the idea of someone reinvigorating some agricultural enterprise there,” says Eric. Indeed, with the garden mere steps away, she is grateful to pluck fresh vegetables at the peak of ripeness. Here, they grow tomatoes, peppers, eggplant, watermelon, cantaloupe, winter squash, sweet potatoes, carrots, turnips, radishes, and a variety of greens. Ladd especially enjoys growing dahlias and California poppies. The tomatoes are all heirloom varieties, a farm market favorite because of their spectrum of colors and flavors. 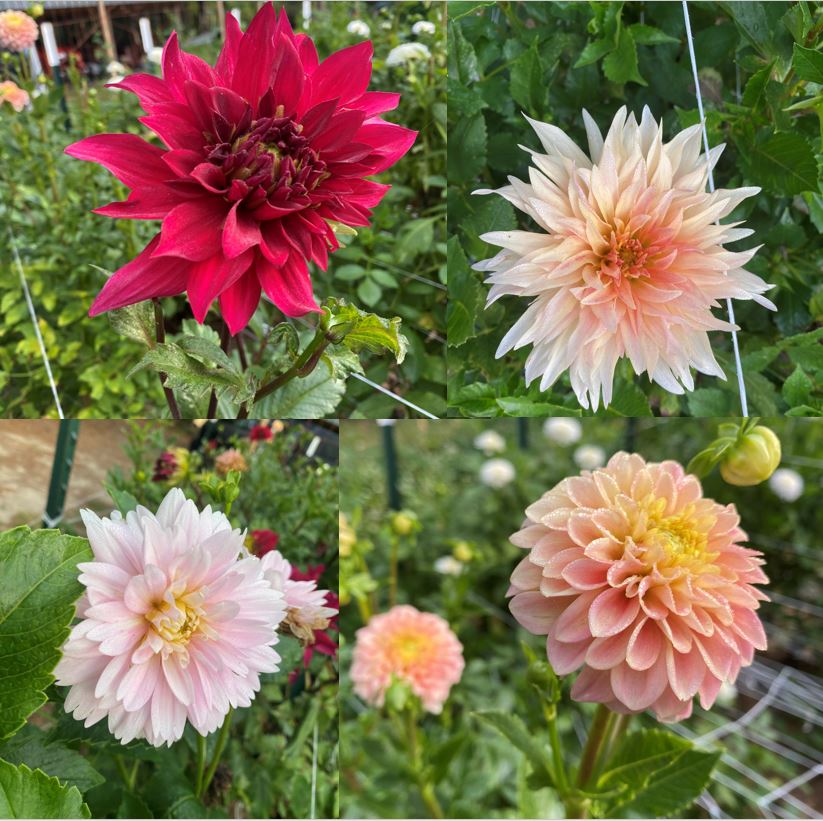 The half-acre garden patch in Wanchese is on a sand ridge just off the main highway. A variety of vegetables grow on half of the field and the rest is planted in asparagus, a native plant that grows wild in the ditch banks around Skyco. “There are asparagus patches around here that are 20-30 years old,” says Eric. Crop rotation is in store for this plot once a determination is made regarding the most suitable perennial fruits and vegetables. 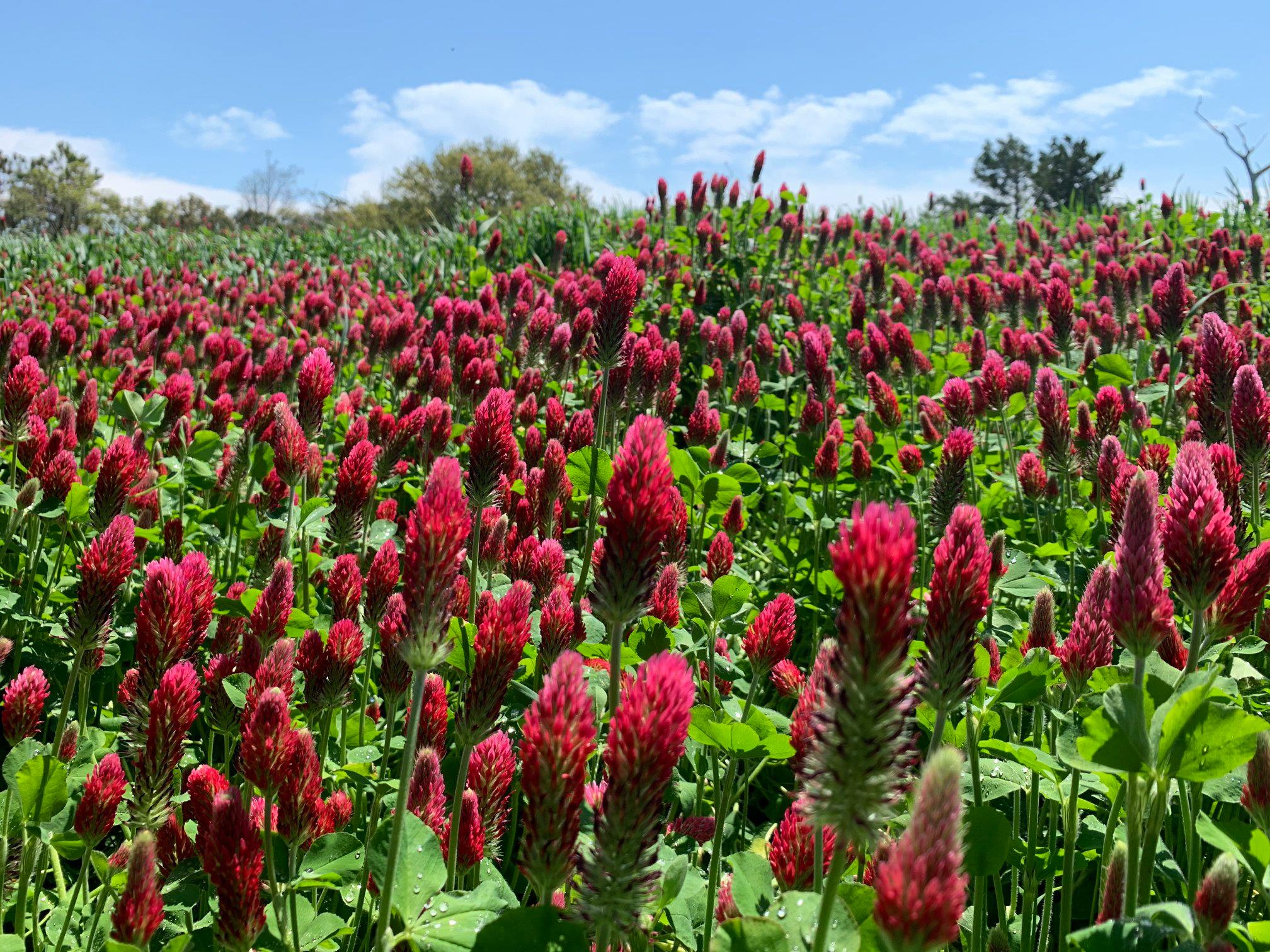 Eric is smitten with cover crops and as he sings their praises, one can’t help but get caught up in the wonder of it all. “I love growing big, lush, waist high crops – crimson clover and Austrian winter peas. It’s like we’re growing our own fertilizer,” he says. “The biomass is returned to the soil and feeds the soil microbes and all the invertebrates living in that soil. It is the backbone of what’s going to support the crops that we’ll sell,” he says. And these remarkable cover crops serve another important purpose as well by providing nectar for pollinators.

With an interest in the history of agriculture on Roanoke Island, growing Hayman sweet potatoes is particularly appealing to Eric. This white-skinned and ungainly shaped vegetable made its debut in North America when Captain Daniel Hayman, who hailed from Kitty Hawk, returned from Barbados with the tubers in tow. Prized for their extraordinary sweetness, they are a specifically local and regional crop. 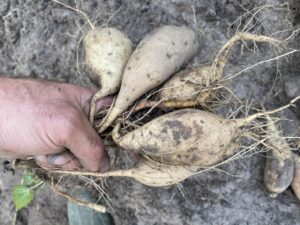 As pale-yellow light meanders across the sky and bird song punctuates the morning silence, Eric makes his way along the dew-moistened furrows and rows of the garden, checking the health and growth of the plants, contemplating where the best fit for this crop or that crop might be. “It’s my quiet place,” he says. “It’s where I feel connected with creation and with all the complexities of the natural world.”

“The journey of establishing and growing Croatan Gardens would not have been possible without the help of folks who have chipped in over the years,” says Eric. He and Ladd both have full time jobs – he as a Restoration Specialist with the Nature Conservancy and she as Executive Director with the Outer Banks Conservationists – that take up most of their time, so they fit in gardening work in the mornings and evenings, and on weekends. 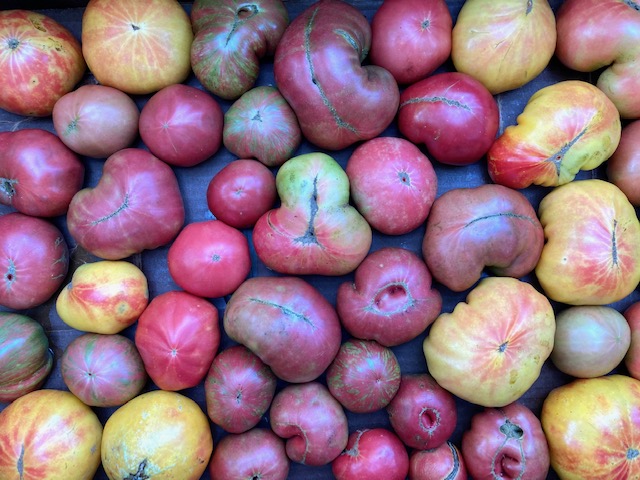 Croatan Gardens’ produce is sold only at Secotan Market in Wanchese. The market was expressly created for various local producers to sell their goods and was conceived with the idea “to rekindle an era where neighbors rely on each other; sharing food and goods, grown and made by our own labor.”

Eric enjoys the direct market approach as it provides the opportunity to interact with customers and share the growing methods practiced by Croatan Gardens: no pesticides, herbicides, fungicides, or synthetic fertilizers. “We rely on plant and animal materials to build up our soil – composts and composted manure.” Pads of wheat and oat straw are utilized for mulch which keeps the soil from blowing around, adds organic matter, and suppresses weeds.

In the Garden, there is some fruit or vegetable or herb ready to be harvested every month, so Secotan Market is open year-round – the first and third Saturdays of every month December through April, and every Saturday May through Thanksgiving. 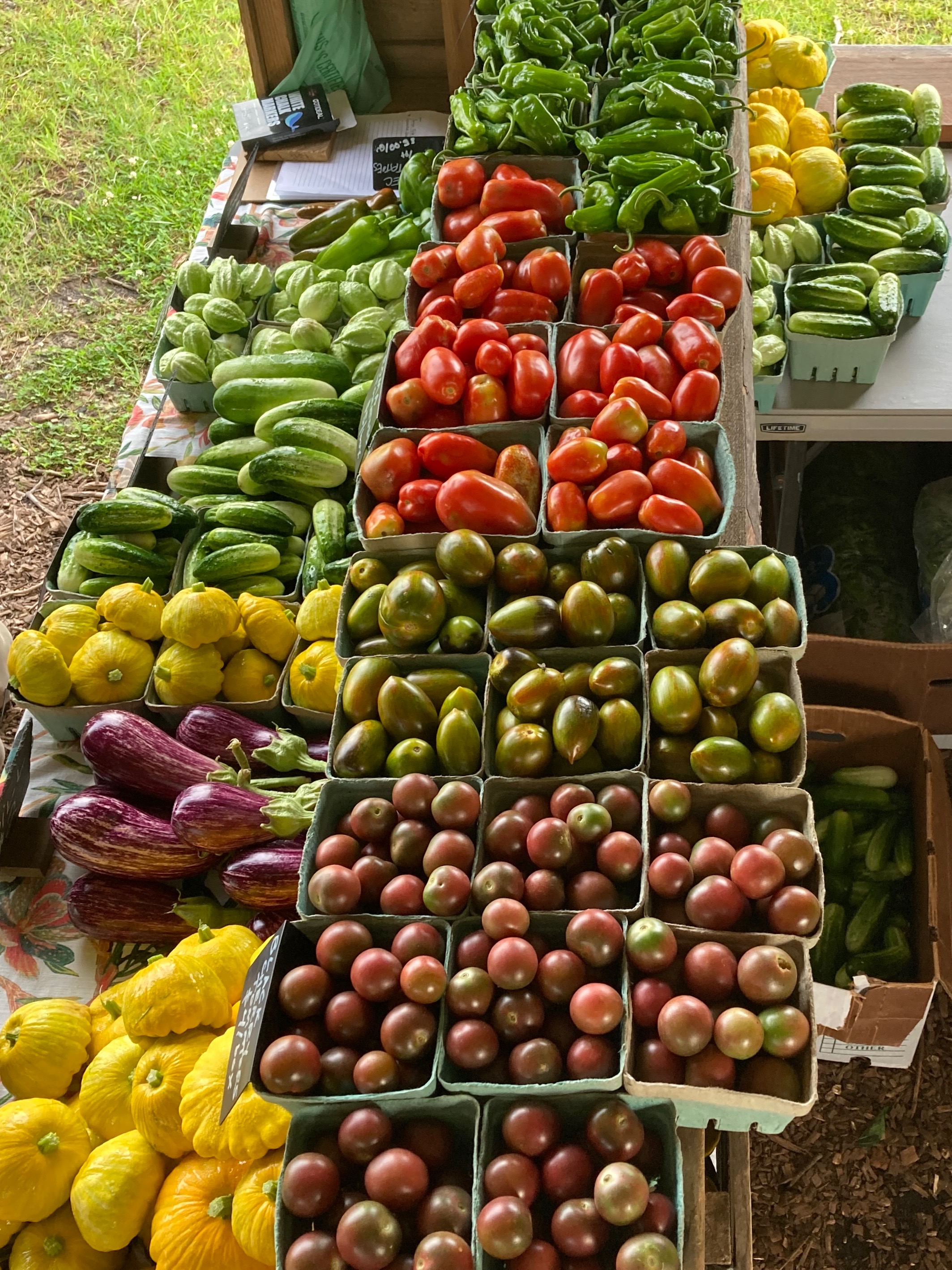 Surplus produce from Croatan Gardens is shared with Bethany United Methodist Church in Wanchese to be utilized in their outreach program, Bethany’s Table. A team of volunteers prepares meals using donated goods and they are happy to incorporate fresh produce into the menu. The meals are delivered within the community every third Thursday of the month.

“There are a lot of people who believe in the importance and the benefit of growing food for your community in your own community,” says Eric, “and Ladd and I were fortunate enough to have relationships with folks who had the same sort of passion and interest in seeing that dream realized.”

So, like a newly planted seed, the idea was nurtured, with commitment and support. And Croatan Gardens took root, growing into a successful venture, enriching the community with a bountiful harvest of goodness.